With the new “LUSEM Learning Hub”, the School of Economics and Management has met a demand for study spaces that has existed for several years. The faculty is now renting 2 000 m2 of modern study facilities in the nearby Alfa 5 building in Ideon Science Park.

The School of Economics and Management’s estate manager Jörgen Norén calls me to say he will be here soon, he just has to “sort something out”. It turns out that there is a Russian lorry driver in the car park with a load of bookshelves he wants to deliver to LUSEM’s new library premises. The only problem is that he is two days early.

“That’s the kind of thing that happens. It’s part of the job,” says Jörgen Norén.

He manages to ward off the delivery, the lorry drives off and we can talk about the new LUSEM Learning Hub. By the way, ”LUSEM” is short for Lund University School of Economics and Management.

From offices to modern study environment

“We are now doing the fine tuning,” says Jörgen Norén, as he gives a guided tour of the light and airy facilities of Alfa 5 at Ideon. He points out an electric cable that is a tripping hazard, as it lies between a computer and the power outlet on the other side of the aisle.

“There were lots of outlets from the start, but we are now adding even more, from the ceiling. These are study spaces where they will sit all day, the students need to be able to charge their laptops.” 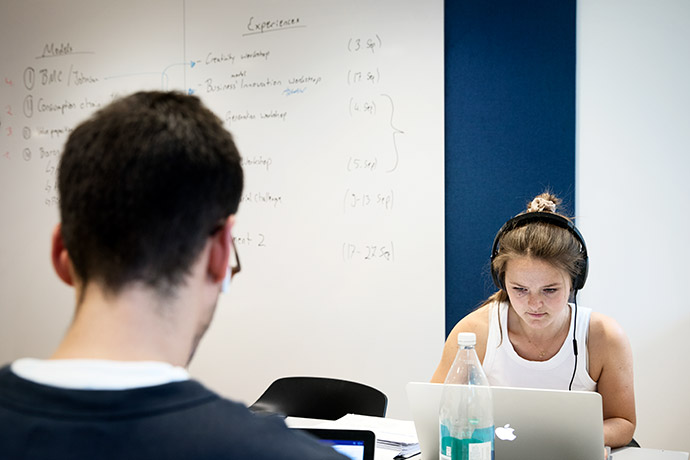 Jörgen Norén has played an important coordinating role in the LUSEM Learning Hub. Since the spring, Ikano Bank’s old office premises have provided several hundred study places for LUSEM’s students. In the spring of 2020, the library will open on the first floor. The second floor will house offices for library staff and certain LUSEM employees. There is also space reserved for Lundaekonomerna, the LUSEM students union.

“It will be exciting to see what happens when more people move in here. Will we see new collaborations? Something happens, both for students and employees, when you walk here from the Holger Crafoord Centre. You meet new people and enter new situations,” says Jörgen Norén.

Student union positive – but even more study places are needed

He has seen during the year how the students have occupied Alfa 5 and made it their own. They fill the whiteboards on the walls with text from floor to ceiling and the first students arrive as early as six in the morning. The good acoustic and ergonomic environment, incorporating lots of textiles, helps to create a calm study atmosphere.

“We are very positive about these study places. They are secure and accessible in a creative environment where the proximity to companies builds bridges between students and the business sector. There is a need for even more study places, but this is a positive development,” says Matilda Eklund, chair of student union Lundaekonomerna.

The study places are available around the clock, but only for LUSEM students.

“Perhaps that will change in the future. I am one of those who think it is worth considering study zones at the University that are open for all students around the clock. Their presence would increase security for us all,” states Jörgen Norén.

In the late autumn, the students were joined by LUSEM study advisers, who have started with drop-ins a few days a week.

Much awaited upgrade for the Library

Next year, the new library will move in and fill the first floor with bookshelves and study places. There will also be space for supervision and more public space – a sort of “speakers’ corner”. The library has outgrown the Holger Crafoord Centre, as the number of students and employees has grown over the years.

“Our existing premises have been altered as we went along and more study places have been created, but there were consequences for the work and study environment,” says Hanna Wilhelmsson, head of the LUSEM Library.

The library staff have been outlining plans for a long while to update the learning environment.

“We had quite a long list based on observations, surveys and study visits we have made. This meant that we had already thought about a vision of how we wanted it to be and that is what we are realising here,” says librarian Katrin Nylén.

The lorry driver returns two days later. The shelves are carried in to what will become the library and stacked along the walls. Hanna Wilhelmsson and Katrin Nylén show the plans for the future library layout.

“Working on the library décor has been an enjoyable process. We are looking forward to seeing how it will look in reality,” says Hanna Wilhelmsson.

Read more about the new library

Find us – maps and directions