The principle of setting a price based on supply and demand is not always desirable, for instance, when it comes to human organs. But how are we to allocate organs instead? At the Lund University School of Economics and Management, Tommy Andersson is researching an alternative way of solving the problem.

“Sell a kidney”, we might say in a jokingly and somewhat careless manner to someone who is in need of a quick buck but not sure how to get it.

HOWEVER, in this part of the world, most of us would agree that we do not want market forces as up close as all that. There are areas where we do not want to let ourselves be governed by the fierce mechanisms associated with supply and demand. 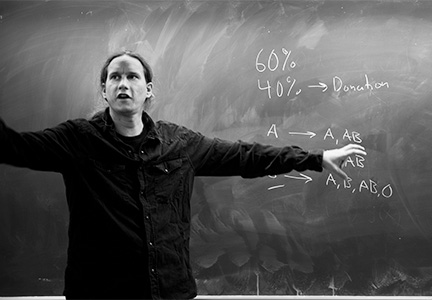 Meanwhile, there are resources that we nevertheless need to allocate on the basis of some form of principle. In Sweden alone, there are hundreds currently waiting in line for a new kidney. They are surrounded by nearest and dearest ones willing to donate their kidneys, along with the other Swedes who have registered as potential donors – however, their kidneys may not be suitable for the recipient. Organ transplantation is not a game. When a person with kidney failure needs a new kidney, both the blood type and tissue of the donor and the recipient need to be compatible, otherwise the recipient’s antibodies may cause problems. And the very best thing is to receive a kidney from a living donor.

IN 2012, economist Alvin E Roth was awarded the Nobel Memorial Prize in Economic Sciences – commonly referred as the Nobel Prize in Economics – for his work on matching mechanisms: how can we utilise the kidneys that people are willing to donate to allow as many kidney patients as possible to receive new, functioning organs, to spare them from suffering and prolong their lives? The algorithms to find optimal solutions are also used in early education, where pupils and schools are matched based on a variety of factors.

Tommy Andersson, Professor of Economics at the School of Economics and Management in Lund, notes that this time the Nobel Prize happened to be awarded in just the right field.

“I was invited to speak at the Centre for Health Economics in Gothenburg on how to use algorithms to facilitate matching the right patient with the right donor.”

A couple of years ago, Alvin E Roth was awarded a honorary doctorate at the School of Economics and Management in Lund.

“It was then and there that things became serious”, says Tommy Andersson.

SINCE THEN, he and his research group have continued the work and refined Roth’s ideas. Transplant physicians and immunologists from four hospitals – Sahlgrenska in Gothenburg, Karolinska in Solna, Akademiska in Uppsala, and Skåne University Hospital – are all deeply involved.

“I am the only one who is not a physician – I simply do the math”, says Tommy Andersson.

The algorithm was initially based on one that is already used in the USA. So why don’t we simply copy it directly into our Swedish hospitals?

“Sweden differs from the USA in this context in that we use other immunological techniques: here we are able to transplant across blood type barriers. Obviously, we would prefer to have as many fully compatible matching pairs as possible, but semi-compatible is better than nothing. Therefore, we had to modify the algorithm and find a level that was good enough.”

FOR THREE YEARS ON AND OFF, Tommy Andersson’s work has been related to the kidney algorithm.

“Today, we’re on the brink of being able to apply the system, but first we need to add some more data that are still missing. Further developments are needed. We must also consider the legal aspects and patient safety – and receive authorisation to access medical data from the hospitals.”

The work to implement the system of matching kidney donors and recipients at all Swedish transplant centres is expanding – discussions are currently underway to also include Norway and Denmark in this major system to optimise transplantations.

“We hope that the results of our work will soon become a natural part of transplant work”, says Tommy Andersson.